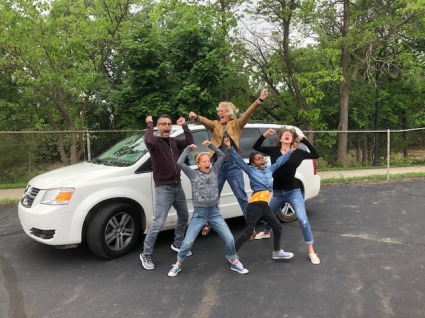 Ministry Motors is an IRS-recognized 501c3 non-profit charity. Our goal is to provide reliable transportation to families and individuals in full-time Christian ministry. Vehicles are awarded based on an application and review process. They are given with no strings attached and at no cost to the awardee.

Check out the presentation of the Burden Family vehicle award. A special thanks to AZee Business Solutions for putting together this video for Ministry Motors.

We Need Your Help 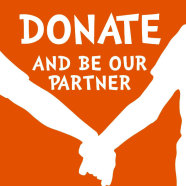 Ministry Motors needs your help to provide vehicles to families in Ministry by partnering with us with a charitable contribution or a donation of your used vehicle.

As a non-profit charity, all giving is tax-deductible. Ministry Motors will issue you a tax-deductible receipt for the Blue Book value of your vehicle.

Even if your car is old, non-running, or a clunker, it doesn’t matter, any donation will help towards providing reliable transportation for those in need. 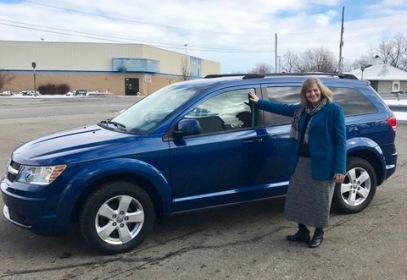 OWOSSO — Aaron Burden, a youth pastor at Trinity Baptist Church in Flushing, was driving a real clunker when Ministry Motors gave him an unforgettable upgrade.

After a talk Burden gave at a local Christian school last fall, he discovered a 2011 Dodge Journey outside, wrapped in a huge bow.

“It was pretty amazing,” Burden of Flint Township said Wednesday. “My wife and kids and I had been praying for a car for a while. It’s a huge upgrade from my car before. Ministry Motors is definitely doing good work — they’re so gracious and generous.” Since forming a year ago, the Owosso-based nonprofit organization has given away 10 vehicles to full-time Christian ministries. All of the vehicles were donated, or purchased with proceeds from the sale of salvage vehicles or cash contributions.

Pastors, missionaries and church camps as far away as Wisconsin and Pennsylvania have received cars, commercial trucks and buses from Ministry Motors. Because the charity is composed of volunteers, 100 percent of donated funds go directly toward giveaway vehicles.

“It’s really been incredible to see it take off,” Ministry Motors President Dave Baldwin, 37, said. “I had visions of what Ministry Motors would be, and the Lord has exceeded my visions.

“We have 60 qualified applications from as far as Australia and Ghana,” he continued. “It’s a little overwhelming to realize the need out there, but it’s been a lot of fun. The response from the community has been great.”

Noel Burton of Grand Blanc, who attends the same church as Baldwin, Immanuel Baptist Church in Corunna, has donated two vehicles, a 2003 Buick Rendezvous and 2002 Pontiac Grand Am.

“I know that people in Christian ministries don’t make a big salary, they’re doing the work out of the goodness of their hearts. So to have a vehicle they can rely on, that’s important,” Burton said. “I figured that donating my cars was the best way to see them put to good use.”

Terri Short, Baldwin’s aunt, served as a missionary in the Fiji islands for 12 years before returning to her home in Shiawassee County.

Hired as a principal at a Christian school in Saginaw, Short lacked the funds to purchase the reliable transportation she needed. Ministry Motors gave her a 2010 Dodge Journey about a year ago.

“I just absolutely praise the Lord because it’s such a blessing,” Short said.

Like Burton, Marvin Rogge of Owosso has donated two cars to Ministry Motors: a salvage Chevrolet Venture van and a Chevrolet Impala reconditioned by Ministry Motors board member Jeremy Yoho, a certified mechanic.

“I did it because it’s a good cause and a Christian thing to do,” Rogge said. “And the people at Ministry Motors bend over backwards — they do everything.”

Baldwin, who owns Trust Thermal — an asbestos, lead and mold abatement company in Owosso — with his mother, Linda Baldwin, came up with the idea for the charity. Yoho, a mechanic at Thermal Trust, performs much of the legwork, including picking up, inspecting and repairing donated vehicles and delivering them to recipients.

Other Ministry Motors board members are Gil Humphries from Bell Tire — who has supplied many new tires for donated vehicles — and Mark Wilson, the website/IT at Trust Thermal. Bethany Baldwin, married to Dave and mother of their sons Joshua, 8, and Jonathon, 5, is also involved. The organization’s goal is to give away 10 more vehicles this year, Dave Baldwin said. “Our recipients are in full-time Christian service. They are working hard, serving other people and meeting a need in the community. The work is very low-income, and they’re trusting God to provide for them,” he said. “To be a blessing to people who are giving their lives to the Lord is a great opportunity. They are so humble and thankful to get a vehicle.”

Baldwin said he is grateful to everyone who has given to the cause with cash or a car. “I just can’t thank them enough for their selflessness. They could have sold or traded in their vehicles, but they were thinking of other people,” he said. “I get so excited whenever we get a call from a donor.”

Ministry Motors is seeking donations of cars, vans and trucks in any kind of condition, whether they run or not. Also needed are car parts or cash. Donations are tax-deductible. Ministry Motors will pick up a vehicle if the drive is less than two hours possibly farther, depending on the vehicle’s condition.